Last week, our campaign sent a protest letter to the Secretary of State for their denial of our request to audit a portion of the voting system — a request which the office MUST officially approve. Read our response here:

With so many issues surrounding the security of our elections in recent years, it is critical for those in charge of our voting systems to ensure the highest degree of transparency and integrity. Unfortunately, this has not historically been the case and has really led to the current crisis of confidence in our Democracy. We have seen political motivations and aspirations held at higher regard than ensuring every vote counts. And when something goes wrong, those in charge are all-to-quick to say everything is operating perfectly.

However, we have already passed a point of no return with regard to our election infrastructure. No longer can anyone simply claim that everything is fine, but that is what keeps happening. We have seen a true lack of accountability from officials in this arena. Additionally, practices continue where there is a real attempt to hide information which might uncover the truth — and this is perhaps even more damaging to our Democracy.

This is why Mike Farb and our team have been working to gain a better understanding of not just what’s happening nationwide, but also within California. The goal of our analysis is to #unhackthevote. And when it comes to statistical analyses of our voter registration/election systems, Farb has produced content which has been used to push for nationwide reform to improve our democratic process. The idea being that transparency is required in order to restore confidence in our election systems. Voters deserve to know what is happening and also what will be done to secure our election systems as soon as possible. For this reason, we have been fighting for publicly owned election systems and 100% paper ballot audits.

In the 2016 election, many Californians faced long lines, problems with their voter registration, and confusing policies which prevented them from voting for their candidate of choice. Additionally, many voters had their mail-in ballots thrown out on the basis of signature related issues as I have written about previously. This is why I submitted a request to conduct an audit on a portion of our election systems in California.

Unfortunately, the Secretary of State’s office denied our request on the basis of us not having turned in their “newest” form.

The office created a NEW form on the SAME day they sent us the OLD form. This email details the date the old form was sent to our campaign email address.

The form below is OLD and was attached to the email above from the Secretary of State’s office, demonstrating a clear intent to provide this form for applications for information requests.

The NEW form, revised on the SAME DAY the OLD form was sent to our campaign demonstrates a clear problem since we were DENIED our request to retrieve information based upon sending in an OLD form. It thus appears that the form was either changed as a result of us making an inquiry or there is clear negligence in not letting us know about the new form. Either way, this demonstrates a problem with the administration of the Secretary of State’s office.

Then our request was DENIED on the basis of not having turned in the NEW form.

These procedural tricks demonstrate a lack of transparency from those in charge of our governmental institutions and most importantly do nothing but fuel the fire of distrust and discord in our democratic process.

I am running to restore faith in our institutions and I believe in order to do this, we must conduct a full analysis of our voting systems from top to bottom as Debra Bowen did in 2007 in California. The people have a right to know what is happening with their election systems if fundamental and I intend to make this happen as your Secretary of State.

Peaceful protests turning violent due to law enforcement escalation? When journalists, children, & designated observers are being harmed during protest, something is VERY wrong. P.S. It’s NOT A PHOTO OP!!! #BlackLivesMatter #protests #JusticeforGeorge 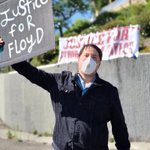